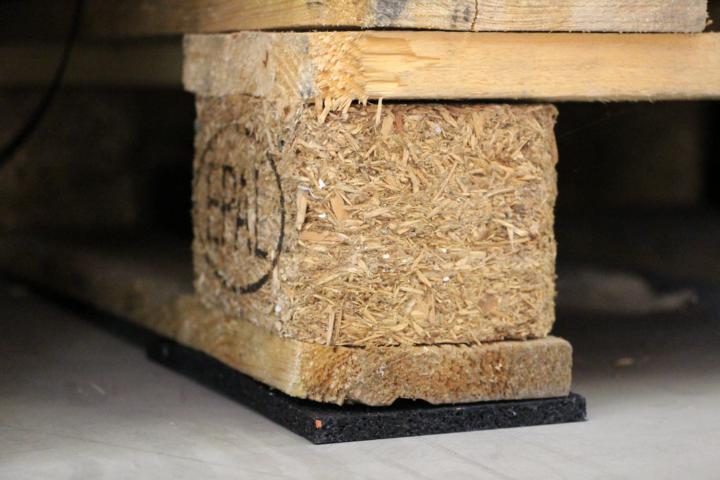 Anti-slip mats are often regarded as a panacea for load securing, but is that really the case? However, from the many observations I have been able to make during loading operations, the picture in practice is often quite different. Things are often "made worse".

The how and what, will be explained below.

First of all, the Functional principle of anti-slip mats (ASM) be displayed.

A coefficient of friction results between all surfaces due to their roughness. How high this is depends on the respective combination of materials. VDI-2700 and EN-12195-1 have defined standard values in tables that can usually be used.

Anti-slip mats are generally assumed to have a coefficient of friction of µ=0.6, which results in a doubling of the frictional force to 60% of the load weight. So much for the theory. 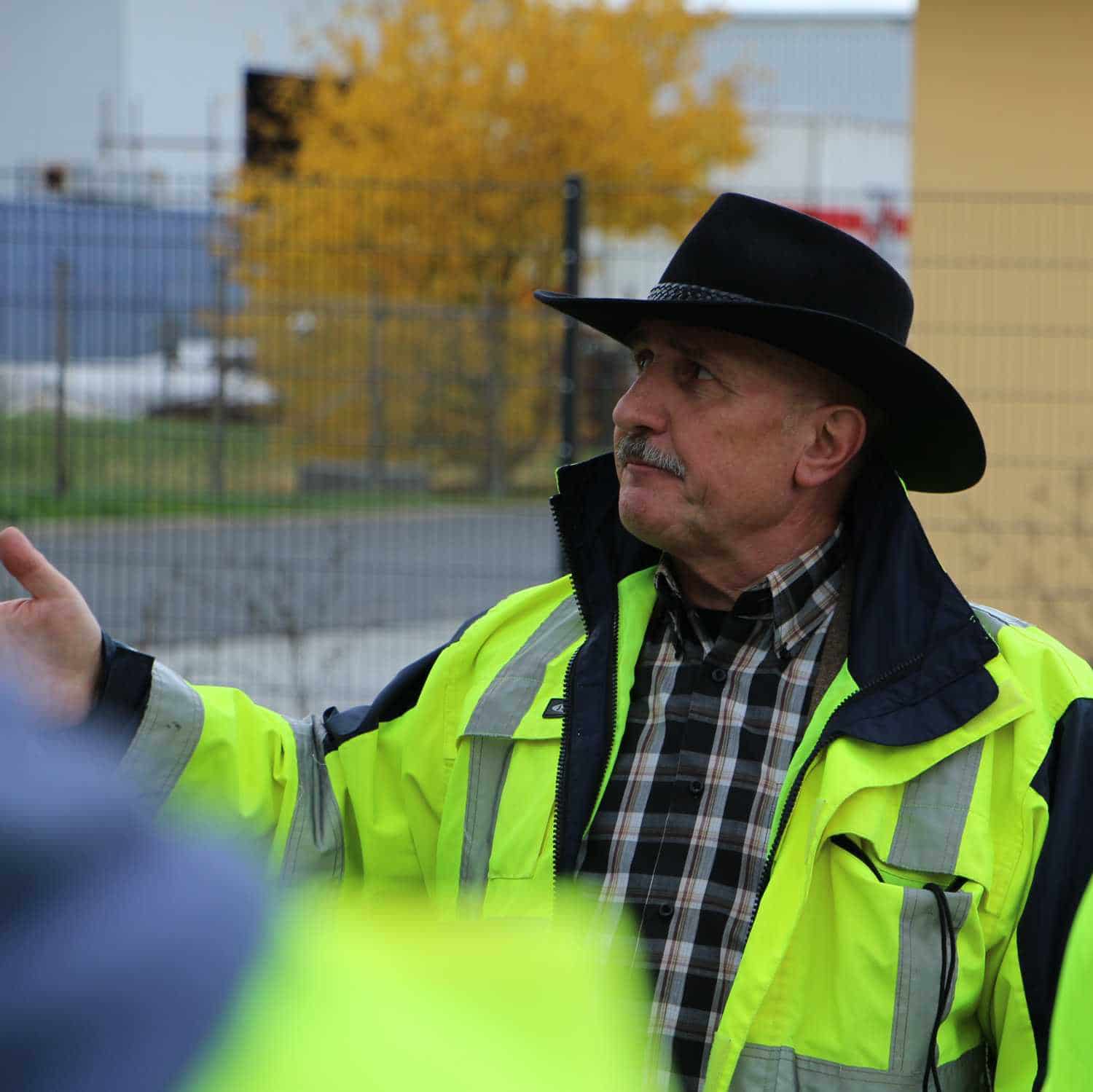 Unfortunately, practice often looks completely different. When determining coefficients of friction, it is always assumed that there is nothing else between the friction partners. This is precisely the crux of the matter, because we often find dirt, grime and other materials in between.

A closer look at the picture reveals an anti-slip mat between the dirt, for which a coefficient of friction of µ=0.6 was naturally assumed. 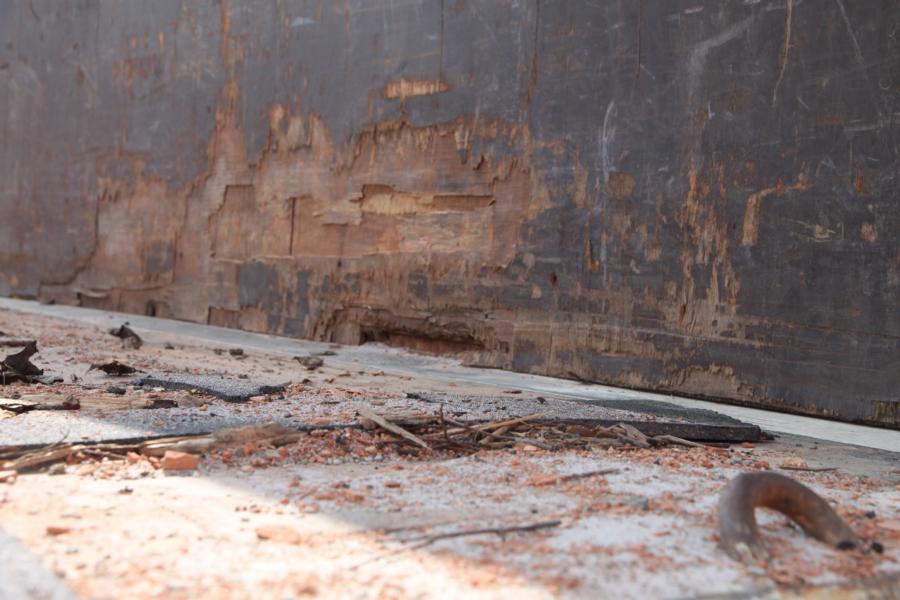 How does this work with the friction force?

When two surfaces touch each other, the normal force produces (FN) Micro-serrations, which provide resistance to displacement (Fx,y) create. From what a frictional force (FR) arises that counteracts this.

If the load were to become heavier under the same circumstances, the displacement force would also increase and thus the ratio of the forces and the coefficient of friction µ would remain the same.

This is also the reason why two loads of different weights start moving at approximately the same time when braking. A nice experiment for load securing training can be derived from this.

This ratio is also the reason why the area, at least in theory, does not play a role, because it would also be shortened when calculating.

If anti-slip mats (ARM) are now used, these fill the gaps between the micro-serrations and a mini interlock is formed, as it were. This increases the displacement force and results in a higher coefficient of friction.

The coefficient of friction of anti-slip mats, according to VDI-2700 sheet 14, is generally assumed to be µ=0.6.

An essential prerequisite for the optimum effect of frictional forces is a clean loading surface. It must be swept before each loading operation so that, as far as possible, only the two friction partners, e.g. the loading surface and the pallet skids, come into contact with each other.

If anti-slip mats were to be used, they too would only then develop their optimum effect.

The situations described below should help to make optimum use of the effect of the frictional force and to avoid errors or misjudgements. 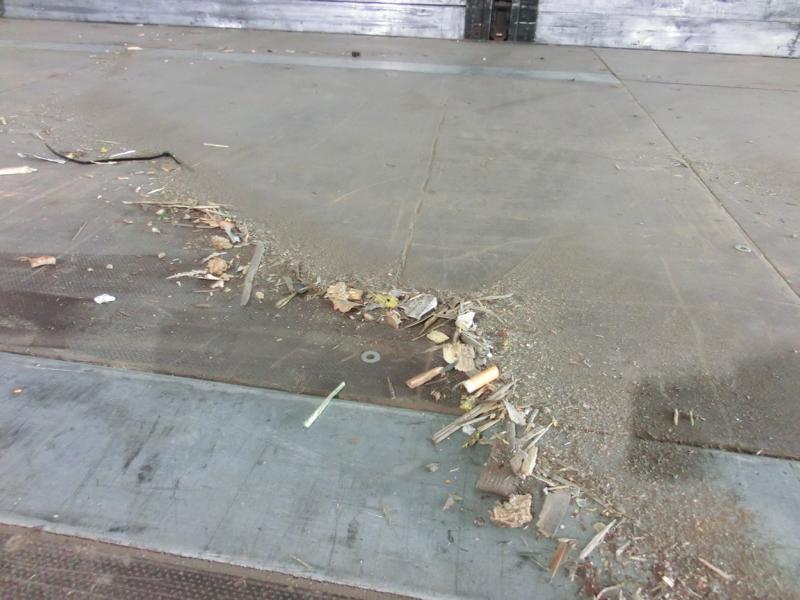 A mistake that is often seen is laying the anti-slip mats only along the edges of the cargo area, while in the middle there are no mats. Sometimes they are also placed only on the police side, in the direction of travel on the left.

The effect is that the assumed coefficient of friction of µ=0.6 is not achieved in any case. Depending on the situation, the control authority may also not include the ARMs in the calculation because they are considered ineffective. 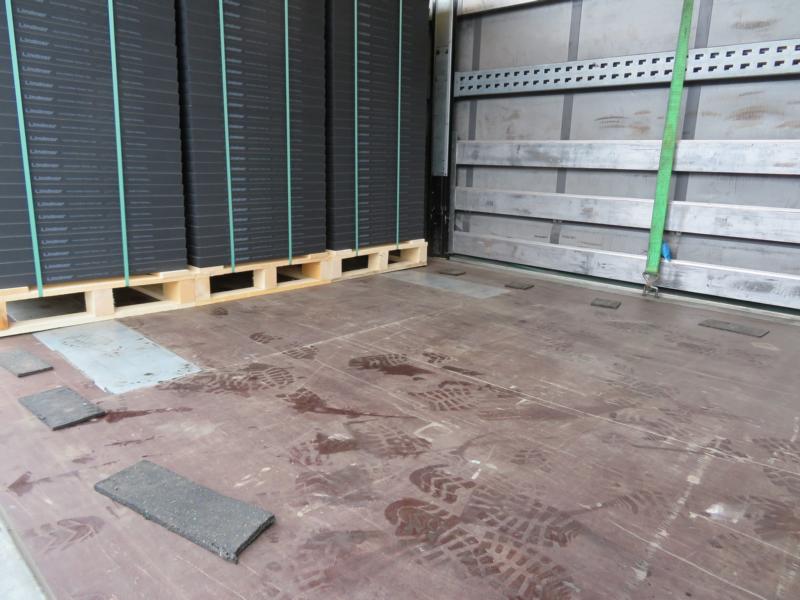 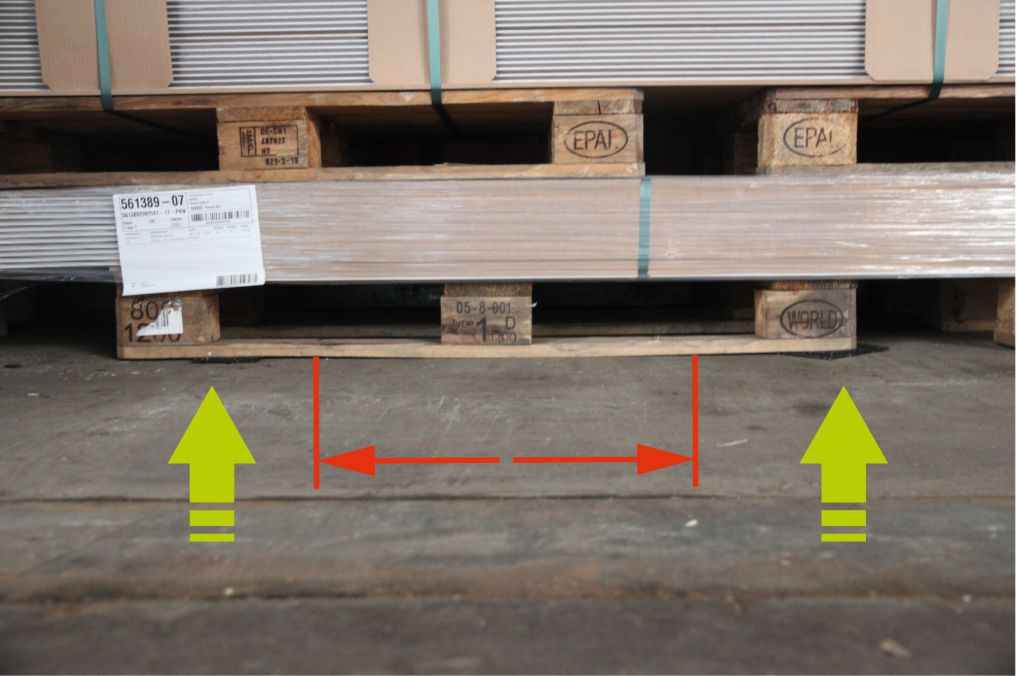 The middle skid is often not placed on ARM. This can work with stable Euro pallets in combination with thick ARM (> 10mm) and full-surface load distribution.

However, this is not the case with industrial or disposable pallets (Fig. right). Here, whole strips have to be placed underneath to achieve a coefficient of friction of µ=0.6. 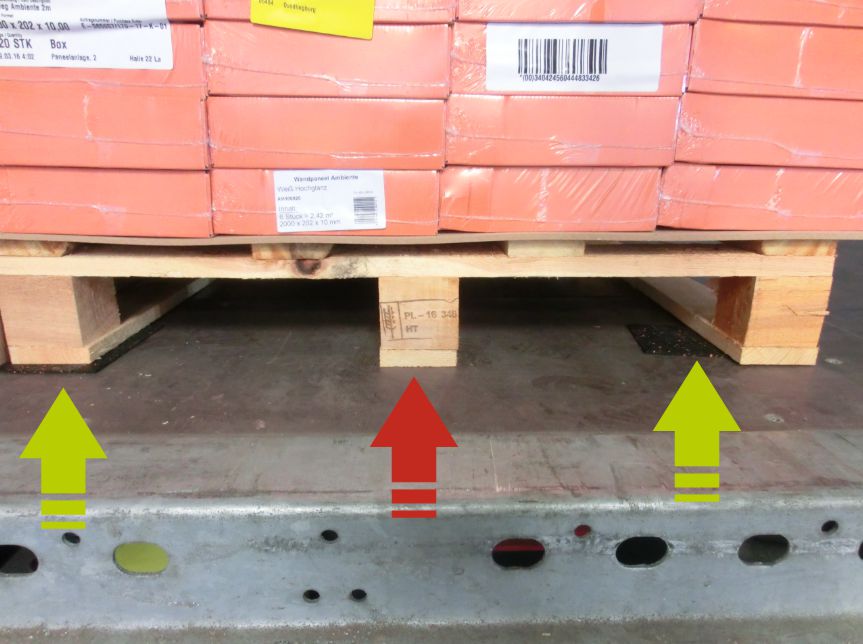 The same unfavorable effect is achieved when the ARMs, although the strip would be long enough, are placed crosswise under the pallet skid.

The larger part of the pallet foot is in contact with the loading area. The loader/driver has given away the potential benefit of the anti-slip mats. 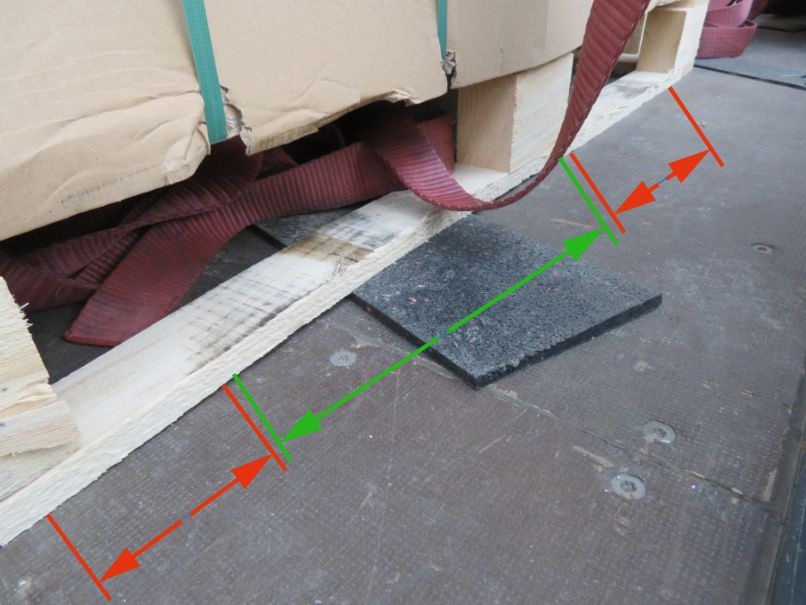 The feet of loading racks, regardless of their purpose, are a general problem, especially if they are not closed at the bottom. 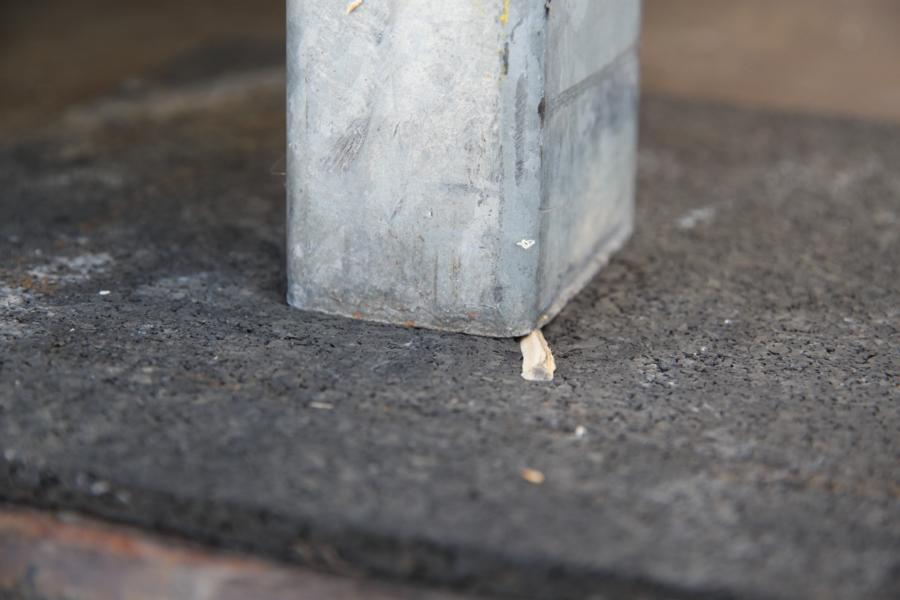 During transport, the omnipresent accelerations scour the mats, the base of the frame stands up on the loading area and the friction-enhancing effect is gone. 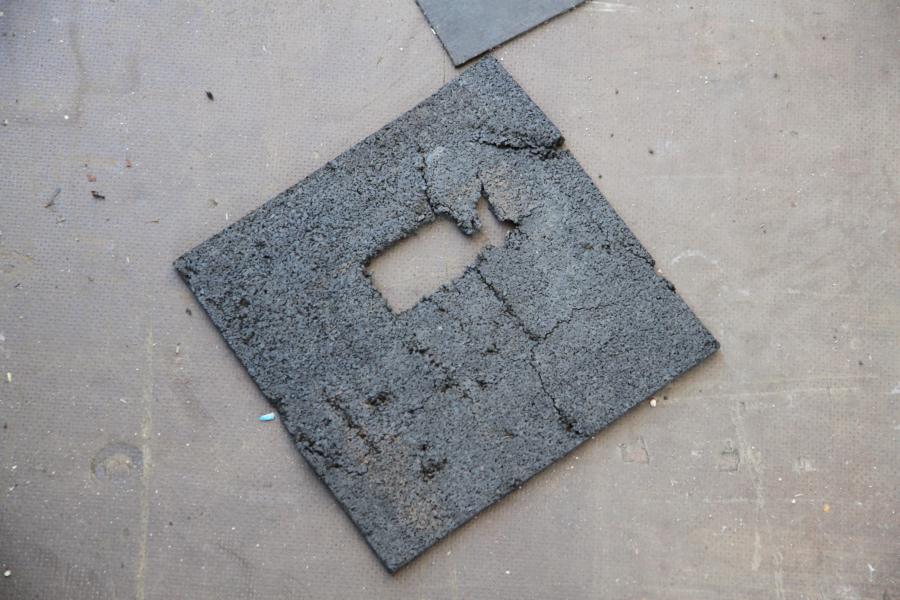 For practical use with a wide range of requirements, the anti-slip mats should be at least 8mm thick, preferably 10mm, so that the load carrier can be separated from the loading area with little effort. 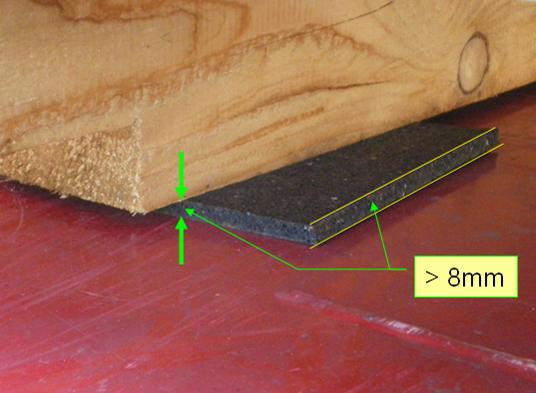 The aim must always be to move the load away from the loading area. That is why ARM strips are better than ARM pads, because they are more efficient to lay. In the picture on the right, the next pallet can already be placed on the laid strip.

The Dimension 200x800x8mm is a good compromise that can solve many congestion situations. 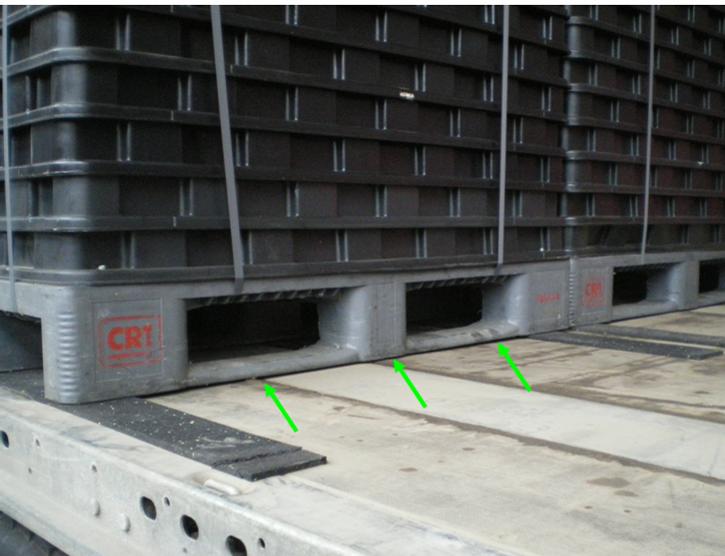 The picture on the right shows how strongly the ARM is deformed. A deformation/compression of max. 30% of the mat thickness is permissible. This was far exceeded here.

Heavy-duty mats would be required for this application, container on flatbed. The same would apply to machinery and equipment if the bearing surface would generate too high a surface pressure. 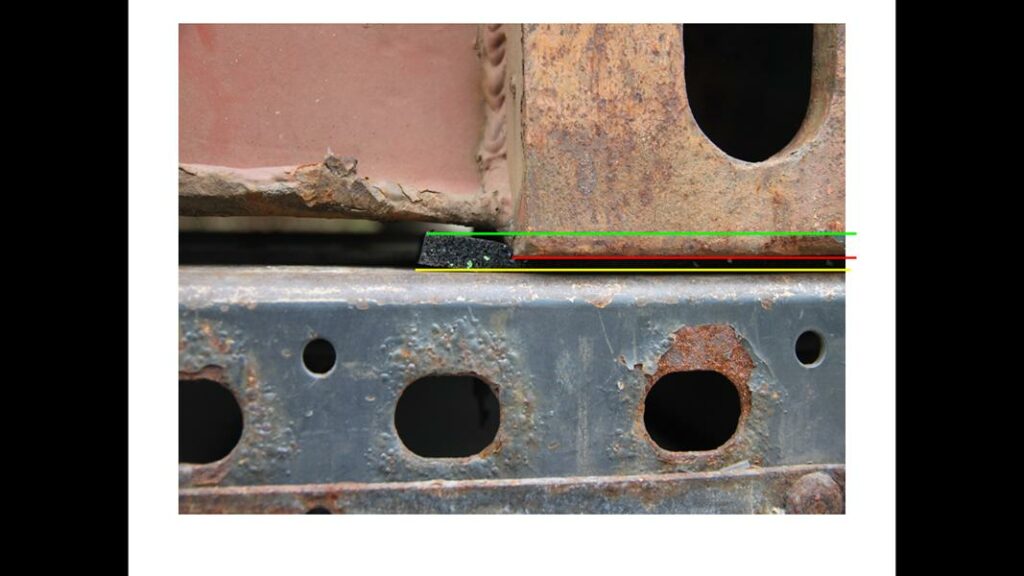 In the case of loads at risk of tipping, it must be remembered that the tipping process starts much more quickly, not to say immediately, with anti-slip mats. This is another reason to additionally secure the load with tie-down or direct lashing.

In order to maintain the effect of the anti-slip mats throughout the transport, the load must be protected by Holding down be additionally secured. Holding down means a Preload force of approx. 150-200daN, this compensates for vertical accelerations, which would result in a reduction of the frictional force.

The vertical force component of direct lashings does the same, as long as the lashing angle α is not less than 15º. 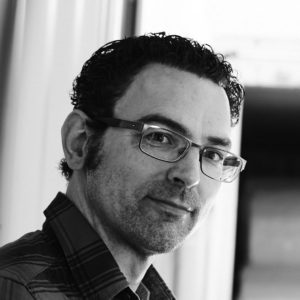 Privately, you also drive around quite a bit.
Not bad at all if you know a few basics about friction. 👍

Special offer: All 9 videos with 50% discount 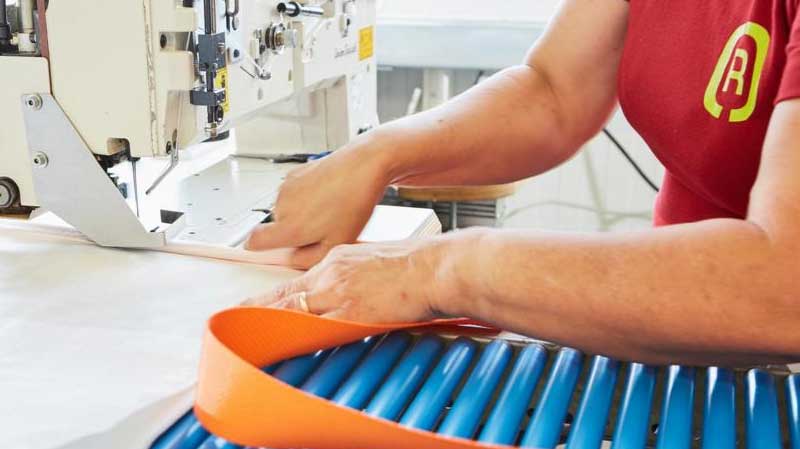 Rothschenk is a manufacturer of load securing equipment for overseas containers. In the tranquil town of Aub in central Franconia, we develop, test and sell our own load securing equipment such as dunnage bags/padding, Lashing restraint systems, Edge Protectors, Anti-slip Mats, Lashing Straps and drum securement. You can get a small insight into our product world in our Online Shop: [R] SHOP24.

Episode 4: Who is responsible for securing the load?

Episode 5: Friction value on the truck - What really counts?

Episode 3: Technical features of the container

Episode 15: How does a Twistlock work?

If you are under 16 and wish to give consent to optional services, you must ask your legal guardians for permission. We use cookies and other technologies on our website. Some of them are essential, while others help us to improve this website and your experience. Personal data may be processed (e.g. IP addresses), for example for personalized ads and content or ad and content measurement. You can find more information about the use of your data in our privacy policy. Here you can find an overview of all cookies used. You can give your consent to entire categories or view more information and thus select only certain cookies.